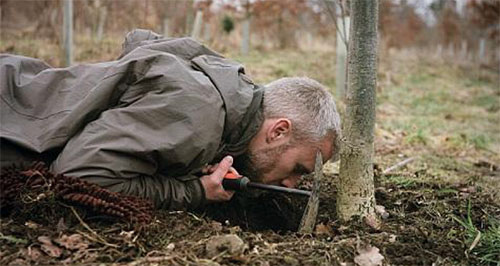 During the 2008 planting season we started our first ever Welsh truffle plantation. At around 5Ha, the site is a good-sized commercial plantation and was planted primarily with a mix of Oak and Hazel trees inoculated with summer/autumn truffle. However, we also planted a very small area with Périgord truffle (Tuber melanosporum) on a warm and free draining hill within the orchard to monitor how the mycorrhiza fare in the local climate.

Out of all our truffle plantations worldwide, this was the first site to be planted without any form of weed control. After 9 months from planting the owner got in contact to let us know that 'burnt' areas had appeared around the base of some of the trees- and so we visited to look closer. Astonishingly, the burnt areas were indeed ‘brules’. A brule is a burnt-looking patch of ground, devoid of vegetation underneath the tree caused by the truffle fungus- these normally appear later in the trees development (typically years 3-7 from planting) and often signal imminent onset of fruiting. This is particularly exciting as the trees were only planted 9 months prior. The brules first appeared on the hazel trees, but by 12 months from planting (late 2008) the oaks were also starting to form brules and this was evident on 70-80% of the trees.

The first harvest of summer/autumn truffles occurred in 2016, which is later than we’ve seen on other orchards in the UK but this is probably due to two reasons. Firstly, management of the orchard was minimal and the trees were largely left to fend for themselves with very little weed control being attempted (we don’t recommend this approach) and secondly, the availability of truffle dogs to check the orchard. Indeed, the first truffles were found on the surface as fruiting bodies that had been collected and dropped by squirrels!

By 2017, the Périgord truffles had also began fruiting. This was a huge surprise as the Périgord truffle is native to the Mediterranean basin and is assumed to be a species that needs high heat and light levels. However, the trees have continued to fruit annually with good quality truffles and this suggests that this truffle species is more tolerant of cooler/wetter climates than we had previously realised.

If you’re interested in knowing more: a lot of our research work is focused on climate and truffles, with frequent academic publications, and we are always happy to advise and guide. For this case study, we published a full paper on the results which is available on request and the details are: