Farmers Weekly – Truffles as an Ideal Crop for Farm Diversification

In the Farmers Weekly Christmas special edition Isabel Davies interviewed Dr Thomas and a current plantation owner, who is on track to start commercially harvesting this upcoming season, about the suitability of truffles as a crop for farm diversification. Truffles was one of four crops featured by Farmers Weekly as having great potential for diversification on UK and Irish farms.

In the Farmers Weekly Christmas special edition Isabel Davies interviewed Dr Thomas and a current plantation owner, who is on track to start commercially harvesting this upcoming season, about the suitability of truffles as a crop for farm diversification. Truffles was one of four crops featured by Farmers Weekly as having great potential for diversification on UK and Irish farms.

Extract from the article:

Farmers are being encouraged to diversify as a way of spreading their risk, but coming up with the right idea isn’t always easy.

Whether it is cultivating truffles, hiring out party bales, offering your farm for film locations or bottling local water, a little imagination goes a long way.

But entrepreneurship is just as important in the search for extra profit, which is why a methodical approach to the decision-making process is vital – and needs to take into account the likely return on investment.

John Smith*, an arable farmer from the Midlands, is at the forefront of a new type of farm diversification in the UK – cultivated truffle production.

The fungi is highly prized in the culinary world and British truffles retail at up to £400/kg. With a potential turnover of £15,000-£69,000/ha once established, depending on yield, it is an attractive business opportunity.

But Mr Smith admits that, while he has found the process enjoyable, eight years into the project he is yet to make a penny from it.

“This is a long-term investment and it was something we did because it was interesting, as much as being a money-making diversification. We were planting a bigger wood and decided we would put 1ha of it down to truffles,” he says.

The wood was planted as part of a partnership arrangement between Mr Smith and a company called Mycorrhizal Systems, led by Dr Paul Thomas, who once appeared on the BBC’s Dragon’s Den, successfully pitching his idea of a truffle-growing business. 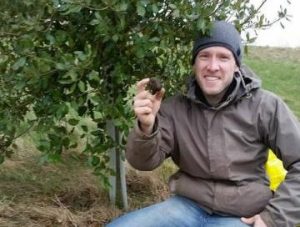 The company provides the trees, grown in its laboratory, and then offers advice and support to establish and run the plantation.

The landowner pays an initial one-off payment at the start of the process and then, as truffles are harvested, the two parties take a percentage share of the yields.

The marketing of the truffles can also be handled by the company, which is looking to build a fresh-truffle brand to achieve the best possible prices.

Mr Smith says before planting he had to raise the pH of the soil so it was more conducive to truffle production. This involved spreading 20t of lime over the 1ha of ground.

In terms of management, the trees have had to be protected from pests and it is also helpful to keep the grass down between them, so you can see the base of the tree. The truffles grow on the root, but under the soil, like an underground mushroom.

Mr Smith says it was a “terribly exciting moment” finding the first truffle – which the family ate and enjoyed – but they have not yet produced enough to sell.

However, the fact he found two more truffles this year shows that the system of inoculating the trees with the fungus does work, so the signs are good. “There is real potential,” Mr Smith says.

Truffle harvest takes place in the summer and autumn and involves training a dog to sniff them out.

“We’re going to train our dog for next summer. Our experience is that the signs of dogs finding a truffle are subtle, so it isn’t easy. It is like everything – we’re on a learning curve.”

*The name of the farmer has been changed to protect his identity. The exact location is being kept secret to avoid the risk of theft.

Truffles as a diversification

• Truffles grow on the roots of oak and hazel trees, but they require a very specific treatment in order to fruit successfully
• Plantations typically produce truffles after four to seven years
• Establishment costs are around £17,000/ha, but grant assistance is available
• There are currently over 20 cultivated truffle plantations in the UK, ranging from the south-west of England to just south of Edinburgh
• Average temperature is the limiting factor for location, so north of Stirling is probably the limit
• Truffle plantations can be used for shooting and amenity purposes, but intercropping or livestock grazing is best avoided
• The UK’s peak harvest period is September to October, during which time truffles will need harvesting weekly or fortnightly

If you have a subscription to Farmers Weekly then you can read the full article here:

For more information on how you can establish a truffle tree plantation then please visit our partnerships page or contact us via the contact form and we’ll be happy to help.
QUESTIONS?

You are in the right place. Please fill out our short form and one of our friendly team will contact you.